Now that you are equipped with the basic knowledge of trading SGS bonds, the next question to ask is when to buy or sell. To answer this question, you need to know the current yield relative to the historical range. A useful tool is to plot the cumulative distribution of the historical yields and the current yield. See the graph below. 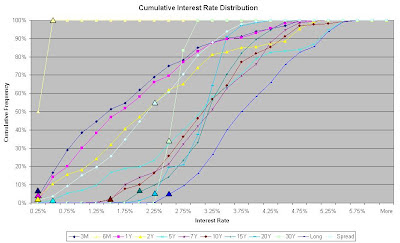 The lines represent the cumulative distribution of the historical yields of all benchmark bonds while the triangles represent the current yield. Using the 3-month bill as an example, the average yield is about 1.5% historically while the current yield is less than 0.25%. As you can see, the current yields for practically all bonds are languishing at new historical lows except for the relatively new 30-year bonds. As bond prices move in opposite direction from interest rates, interest rates are likely to rise in the next few years and bond prices likely to drop (by a factor of Change in Interest Rate x Duration). Hence, significant potential losses exist for long-term bonds.

A second useful tool is to compare the spread between long-term and short-term bonds. Usually, a spread exists between these bonds, as longer-term bonds would need to offer higher yields to compensate investors for inflation in future. However, during certain periods, the spread could significantly widen or narrow beyond its usual range. This can give rise to potential trades in either long-term or short-term bonds. See the graph below. 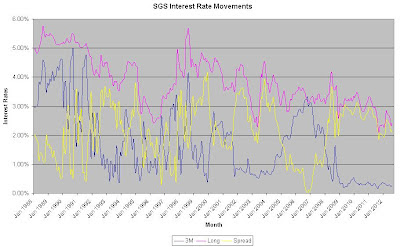 The above are 2 useful tools for investment in SGS bonds. Hope they can assist you in investing in SGS bonds!