Will Suntec Reit Carry Out a Rights Issue?

It is the new year already, and in another 3 weeks' time, REITs will start to report their financial performance. For REITs with December as their Financial Year-end, they will also have to update their property valuations. With COVID-19 having caused significant changes to the way people live, work and shop, one of the key risks to REITs during this period is whether property values will decline significantly. This could lead to breaches in Aggregate Leverage limits, leading to rights issues at unfavourable prices.

One of the REITs that caught my attention is Suntec Reit. It owns offices, retail spaces and part of the convention centre in Suntec City. It also owns part of One Raffles Quay, Marina Bay Financial Centre and 9 Penang Road (formerly known as Park Mall). In recent years, it has diversified into Australian properties. 2 weeks ago, it bought a 50% stake in 2 office buldings (Nova) in London. The acquisition was fully funded by debts and perpetual securities. Post-acquisition, the Aggregate Leverage limit would rise from 41.3% as at 30 Jun 2020 to 43.5%. An Extraordinary General Meeting was held on 4 Dec 2020 to seek shareholders' approval for the acqusition. One of the questions that shareholders asked was "what is the level of Aggregate Leverage Ratio (ALR) the board would be comfortable with?". Suntec Reit's reply was "the target ALR is between 40% to 45% with the appropriate interest coverage multiples". Thus, although REITs are allowed to raise their ALR to 50%, Suntec Reit would not be comforable if the ALR were to rise above 45%.

In the latest business update for 3Q2020, Suntec Reit reported that the committed occupancy for its Singapore offices dropped from 99.1% in 4Q2019 (pre-COVID) to 98.1% in 3Q2020, while that for the Singapore retail spaces dropped from 99.5% in 4Q2019 to 93.4% in 3Q2020. Footfall in Suntec City Mall is down by 53% in 3Q2020, although tenant sales are down by only 21% over the same period. The occupancy for retail spaces is more greatly affected as people work from home and as travel restrictions and safe distancing measures limit the number of exhibitions held at the convention centre. If you have not been to Suntec City for a while, you should visit the row of shops where "llao llao" is (at Level 1, near the entrance of Esplanade MRT station), to witness the impact on retail occupancy.

For 3Q2020, the URA Property Price Indices for Office and Retail Spaces show there is a Year-on-Year decline of 8.4% and 0.7% respectively. Applying these drops in value to the Singapore offices and retail spaces, the total value of the properties would have dropped by 4.1%, leading to Aggregate Leverage increasing from 43.5% to 45.4%, which is just above the target range for Suntec Reit. 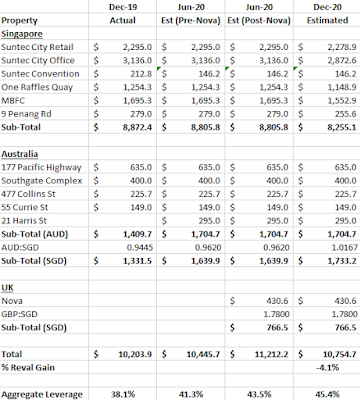 Email ThisBlogThis!Share to TwitterShare to FacebookShare to Pinterest
Labels: REITs