What Happens When Your Shares Are Compulsorily Acquired?

Two months ago, I had blogged that I would not accept fully Capitaland's privatisation offer for CapitaMallsAsia (CMA). I wanted to have a taste of being a shareholder in an unlisted company. Unfortunately, Capitaland managed to acquire enough shares to compulsorily acquire all the shares, even from dissenting shareholders like myself. How was the compulsory acquisition carried out? 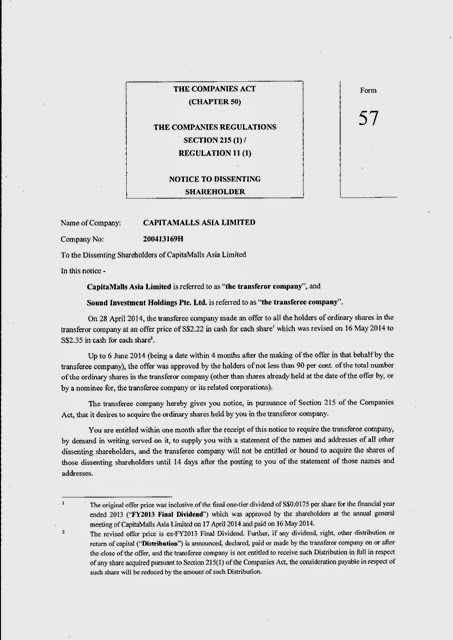 For CMA, no such post-delisting drama took place and the shares were compulsorily acquired on 16 Jul 2014, 1 month after the notice of Form 57. The sales proceeds were received on 21 Jul 2014. Thus, the story of Capitaland's privatisation of CMA has ended. This post is for the information of anybody who intends to reject a privatisation offer in future.

Email ThisBlogThis!Share to TwitterShare to FacebookShare to Pinterest
Labels: Stocks